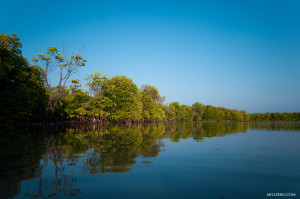 Noonu atoll is where a lot of wetland areas can be found in Maldives. Few days back I was invited to a few islands of the atoll. While there, the large open system mangrove at Maalhendhoo caught my eyes.

The island has about a 1:1 ratio wetland. What I mean to say is that this island has a relatively large Kulhi (mangrove). When you entering into the harbor of the island you are at one end of the huge Mangrove, to the north you would see the rest stretch till horizon.  Different species of vulnerable plants grow on this sandy place, such as Takafathi and, mostly, Karamana(Ceriops tagal). However, a few Thela (Excoecaria agallocha) plants can also be found.

Lots of animal species, including young prawns, crab, snail and fishes can also be observed.  Bird life is very low at this season.  I also noticed the sea cucumber (Huifilandaa (Holothuria scabra)) that has been introduced into this ecosystem. I was very interested in learning about the farming techniques they use and enquired my friend about it. He told me that the aquaculture work started 2 years ago and young specimens had been released to the mangrove twice.  Four people from the island have been employed to maintain the project would be paid MRF 1/- for keeping the sea cucumber for a period of one year and MRF 2/- for second year.

I asked my friend how they get the young sea cucumber.  He told me that the people buy it from Landaa Dhombe (sea cucumber brother) at a very cheap rate and that they have to sell it after keeping it in the water for an year or two.

I also asked him who came up with this idea. He said it was Landaa Dhombe’s idea. He has been cultivating this in several islands in Shaviyani, Noonu and Raa atolls.  He had come to this island and suggested to the people that they would get a good income out of project – like a million Ruffiyaa per annum. 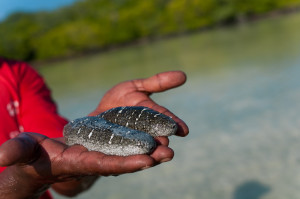 I asked him what happens if someone takes these sea cucumbers and sell it to someone else?  His reply was “Dhombe would know this because only he has this species of sea cucumber in Maldives”. His answer really intrigued me!

I asked how Landaa Dhombe produces it. I was told he had a laboratory in one of the uninhabited islands in Raa atoll and a farm island given to him by the government located in Shaviyani atoll. Apparently, their technique is kept a secret and only he and his son could enter the laboratory.

I asked how often Landaa Dhombe visits the island. My friend said the guy comes to the island with the young species and goes back.

I asked him if he was a microbiologist. This time my friend didn’t know what to say and after waiting for some time he said that the guy lives in Malaysia and had bought the laboratory from old Japan/Korean associates who were running a pilot project in Shaviyani. 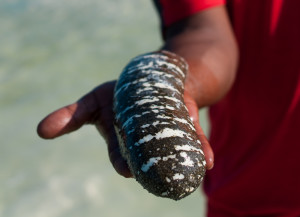 I asked what happen to those people. My friend said he heard that the project was a failure. Apparently they couldn’t cultivate any sea cucumber and Landaa Dhombe had bought equipment as he had been working with them inside the laboratory and outside.  Also sometimes he brought some samples from other countries.

Next day early morning, as usual I explored the mangrove from the jetty till the end.  I found that this open system mangrove had been blocked by some man-made barrier. I also found lots of plastic bags which had been used to transport new species to the mangrove 2 weeks ago.

As this year is celebrated internationally as the year of biodiversity and Maldivian government has officially started this movement few weeks back at Sultan Park, Male’. I request all relevant authorities to check these places for Invasive alien species and if this is illegal to stop this project immediately. More likely to stop spreading these  (Holothuria scabra) sea cucumber in different islands and habitats.

5 Replies to “Alien Species cultivated in the Maalhendhoo Mangroves”